If the name sounds familiar to you, it could be you have read any of the number of reviews featured in the American Record Guide, International Record Review, Fanfare, Classica, International Piano, PianoNEWS, and BBC Music magazines, among others. 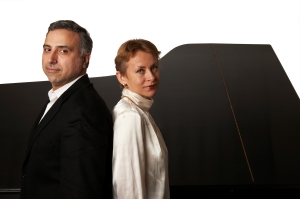 Founded in 2003 by Andrey Kasparov and Oksana Lutsyshyn, Invencia Piano Duo prides itself on artful, insightful, and articulate performances of duo piano masterworks.

Translated loosely as, “Inventive,” Invencia has earned praise worldwide for its recitals and recordings, including a 4-volume set of Florent Schmitt’s complete original works for piano duet and duo. These recordings were released on the Grand Piano label of Naxos Records, between 2012 and 2013. Issued on the American Classics label of Naxos in 2016, Invencia produced two volumes dedicated to the complete piano works of Paul Bowles.

Their repertoire extends from the Baroque to the present, including original works and arrangements for this twin art form, befitting the spirit of Invencia.